5 per Day plus Nemesis

The Arena is just as it's name suggests an arena where your hero and their Mercenaries team up against another player's in a 5 on 5 battle. It is accessible from the Hero Arena which can be built once your Town Hall reaches level 4.

This game mode includes a full array of Hero Aids and your lineup with default to those Heroes and Aides you have assigned to your Heroes Halls. If you wish to set a different lineup for the Arena you can click on the 'set attack formation' button on the Hero Arena and click the Arena tab and then setup your Heroes and aides in whatever manner you wish. Lastly make sure to put a check in the 'Activate saved formation' box in order to use this custom setup. If you are a low level player you may wish to not use this method, as it can be frustrating to have to constantly update these formations as you get better heroes.

Each day at 12am Server Time players receive 5 chances to challenge other players in the Arena. This is not live battle, as the person being challenged is controlled by AI. The challenge is to defeat all their heroes and mercenaries or their arena building in order to gain Arena EXP which is used to determine which rewards you qualify for, your rank among all players, and which players the game matches you against.

Each day the game automatically matches you against 3 players who are supposed to present a range of different difficulties for you as they can be within 60% and 105% of your current Arena EXP and will generally be arranged where the lower ranked opponents are on the left and the higher on the right. Each opponent is worth a certain amount of Arena EXP determined by the difference between your ranks. These match ups can and should be re-rolled as many times as you like at the cost of Gold by clicking the 'Reset' button at the bottom of the window. The Gold price depends on the level of your Town Hall and maxes out at 20,000.

The fourth opponent in the window known as the Nemesis is treated differently.

The 4th opponent in the Arena window is the Foe of the Day, also known as the Nemesis. Defeating the Nemesis rewards you around 3 to 4 times greater EXP and you can challenge the Nemesis as many times as you would like because you are not charged a challenge to do so. You are however, only allowed to defeat this opponent once per day and the opponent cannot be changed with the reset button. The Nemesis changes every day regardless of whether the previous one was defeated.

The Nemesis' Heroes have their HP and ATK boosted by 30% and to counter this you are allowed to optionally 'curse' the opponent with a Cursed Token. This is an item which reduces damage and increases damage taken by 20% for your opponents Heroes. Each curse uses one Cursed Token item and up to 3 curses can be applied per day. The tokens are able to be acquired from various Events.

Clicking Challenge takes you into the Arena which is a basic map which is divided in two with a large area outlined on your side of the map. The battle does not start right away to give you time to adjust which Heroes you would like to use and where they are positioned. You move your heroes by clicking on their Heroes Hall and dragging it around, also be mindful of where you place your Arena as allowing it to be destroyed will automatically cause defeat.

When the battle begins, the Heroes Halls disappear and Heroes will start on the location where the Heroes Halls were. Heroes will proceed to attack the nearest possible enemy target. Battle ends when all enemy heroes and mercenaries are dead or the enemy Arena building is destroyed.

If you have multiple Heroes allied in the most forward position the game seems to prefer to target from left to right but the Arena building is treated differently. When attacking if the opponents Arena is positioned one space back from the most forward Hero your Heroes will attack it, but on offense the Arena has to be even with or in front of your Heroes for this to happen. So many players position there Arena 1 space back in order to allow other players to get easy wins against them. That is because there is no penalty to losing on defense and there is no reward for winning. Of course you are providing those players an opportunity to pass you in the rankings but you are also helping weaker players build exp making it easier for you in turn to do so.

Winning a challenge awards Arena EXP. There is an array of Ranks which can be attained by reaching certain EXP totals and doing so provides some significant rewards.

The amount of EXP awarded from each opponent is dependent on the difference between the player's current total EXP and the opponent's total EXP. Hence after each win, the remaining opponents' EXP reward will be slightly lowered.

Arena seasons last two weeks resetting every other Sunday at 12:00 Server Time resetting all players Arena EXP. This resets your rank as well, so with the start of each new season you are eligible for the full array of rewards.

Players gain EXP in arena through winning challenges. Arena EXP is used to determine your Arena Rank relative to predetermined rank tiers as well as other players.

At certain EXP totals you will rank up and be awarded progressively better rewards. These rewards can be quite substantial and make it very important to focus on your Arena participation. You can claim/inspect your rewards by clicking the 'Rank Reward' button on the main interface. You must first claim the reward of a lower rank before claiming the higher rank rewards. Below are the ranks and their respective rewards:

If you were ranked high enough in the prior seasons Arena Rankings you can build a statue in your base to commemorate the achievement at the cost of 1,000 Gold. The function of this statue is that it will buff the Hitpoints of all your Defense Buildings by up to 100% depending on your rank. 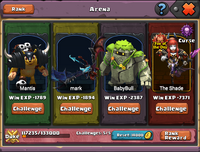 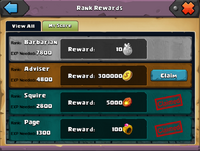 Retrieved from "https://col-2.fandom.com/wiki/Arena?oldid=7210"
Community content is available under CC-BY-SA unless otherwise noted.