Campaign Clash is a game mode where the player chooses a team of 15 heroes and attempt to defeat as many dungeons as possible. Various rewards are awarded to the player as they venture further into the chain of increasingly difficult dungeons. All heroes that take part in the campaign will gain a small amount of EXP at the end of the campaign, which the amount is depending on how far into the campaign they manage to get to.

Playing the Campaign Clash is the only way a player can reliably gain Mystic Crystals in game. The only other way is the occasional in game Events rewards that usually requires the purchase of Jewels by the player.

Campaign Clash is accessible once the player has built the Ancient Relic building.

Rewards are awarded on each completed dungeons. In dungeons that players' hero team fight against another hero team, it rewards EXP and Mystic Crystals. In "chest" dungeons, players can get random rewards without having to engage in battle. 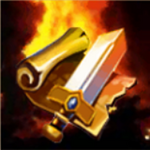 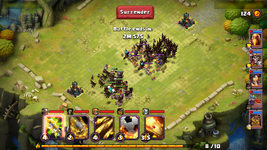 Retrieved from "https://col-2.fandom.com/wiki/Campaign_Clash?oldid=6782"
Community content is available under CC-BY-SA unless otherwise noted.